Building a bed that would fit into relatively small space of the Toyota was  a challenge but a fun one!

Pinterest was the first port of call for inspiration from other keen DIY Campers, on first search it seemed that the way to go was the standard rock and roll bed, but I felt this took up way to much of the precious space we had.

I then found a design for a pull out bed, where the slats of the bed frame interlink like so:

This design just seemed right, as I liked the fact that when the bed slats where pushed in, that it created a handy L-shaped bench that would allow us to sit a bit more comfortably in the van, and would be a whole lot more social, instead just sitting straight out the front of the cab. 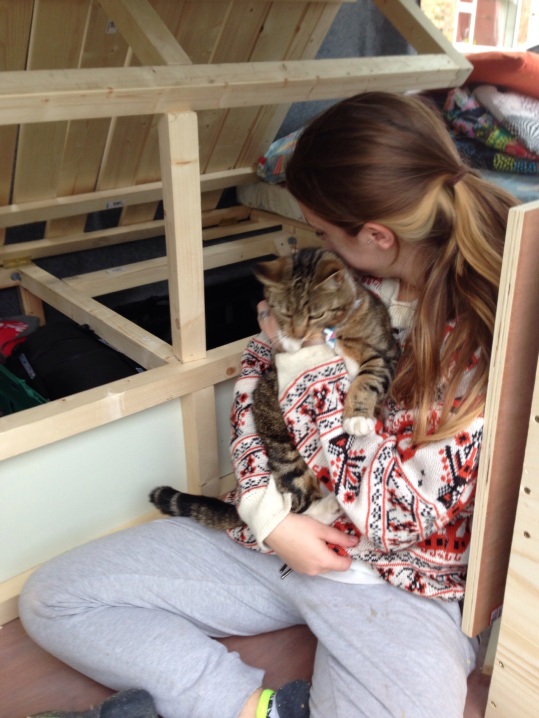 The other reason for this design was the possibilities with storage, at the back you still had a good size boot under the back bench, and the for front bench I decided to put a hinge so that it could be lifted up and used as a mass of storage.

For the mattress, we went to Ikea, we went originally to get a futon mattress after finding out the cost of getting bespoke foam and we had seen it had worked on the pinterest post above. 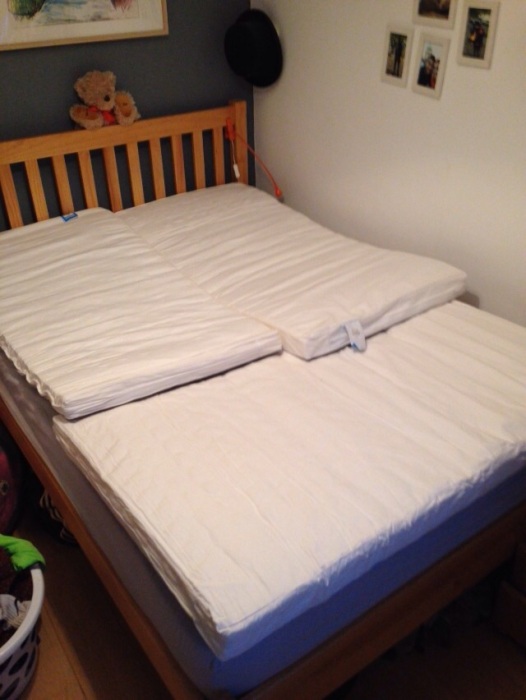 However when we were in Ikea we stumbled across a 3 part mattress that’s intended use was for a pull out sofa,  this ticked all our boxes, firstly it being in 3 parts and also thin and comfortable, our only concern was that is was going to be too big for the van (as I had stupidly left my sketchbook with all the measurement at home) so we had to take the risk, luckily the risk paid off.

But as you can see the 3 part mattress is actually slightly bigger than our bed at home!

After the design was figured out and the mattress chosen the next step was to actually construct. having figured the height of the bench/bed to be 35cm.

I began creating the frame out of Wickes 47×47 stud-work timber, I wish it had been as simple as creating to box frames and placing them in, but with the wheel arch being in the most inconvenient place, I had to construct around this, basically making one smaller box frame and then connecting to the other frame around the wheel arch.

After the frame was all fitted in place, and I had built an additional single rectangle frame for the pull out, I then went about screwing down the slats, giving plenty of room for a smooth pull out motion.

I had to make sure a few slats were slightly longer so as to overlap the pull out section, so when lifting up the frame it would act as a catch to make sure the whole frame lifted instead of just the front section.

In the image above you can see that the front slats that pull out are drooping, I attached a long piece of wood under the slats to act as a support but also as a stopper when pulling out the bed.

All in all we are very happy with the design. hopefully it will hold up!

We’ve had serious arguments prior to the van carpeting weekend about who was going to do it and both myself and sam had come prepared to the fight with reasonably pathetic excuses as to why we shouldn’t be the ones to do it. (Not once in this whole discussion did we consider sharing the work, we just really didn’t want to do it)

So my own reasons were:
1. I didn’t know how ( Sam spent a week sending me YouTube videos of people carpeting – all of which I didn’t watch)

2. My knees hurt… (The marathon training was crumbling my knees)

3. It seems overly complicated and I genuinely thought we should pay some one to do it!

Well it actaully turns out that carpeting a van is the easiest job. And we were arguing and grumbling for weeks over nothing so for anyone else in the same predicament- it’s ok! Just do it!

The basic steps of it are:

Although, admittedly I gave up after the first wall as my knees couldn’t hack the kneeling and my lungs and head struggled with the spray so Sam carried on and did a fabulous job!

We have successfully completed the bed, we used a method to extend the bed as found on Pinterest where you pull out opposite slats (it probably explains it better in the photos)

The frame was the most difficult part, Sam did Tenon and mortise joints to make it strong and then we used L brackets and wood glue to fix everything together.

The bedding is from Ikea, we were going to get the foam cut and make a nice cover for it but we are on a tight budget and time limit so this one is perfect for what we needed. Maybe we’ll dye it or make a new cover but for a £130 I think it’s doing the job!

As you can see we are working hard to piece together the van before our great escape.

In the past 3 weeks we have; insulated the side panels with silver bubble wrap, silver tape and wood, we have began to craft the bed and the floor is down!

– Fix the floor with adhesive and varnish

Doesn’t seem too hard… now for the 4th trip to the DIY shop in a week. 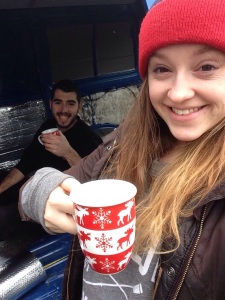